In Chinese martial arts, the benchmark for sword practice has always been Wudang Mountains. Wudang sword or "Wudang Jian" is considered as one of the three patrimonies of Wudang internal arts, along with the Neidan (internal Elixir) and Taijiquan (Tai Chi).

Wudang sword maintains the inner essence that characterizes the styles or systems practiced in the mountains, in which direct confrontation with the opponent is avoided and bets more on anticipation, circular movements and absorption opposite's force avoiding the confrontation of force against force, trying to divert and redirect the blows before happening to the offense.

Practitioners of sword, Jiàn kè (剑客), for the execution of techniques originate the movement in the feet, transmitting it through the waist and expressing it through the wrist. The thrust action with Wudang sword, Diǎn jiàn (点剑), is generated causing at the tip of the sword a whip action that penetrates the target and instantaneously bounces back quickly. The body moves like a dragon and the sword moves like lightning. Movement of the feet is agile and movement of the body is soft and flexible.

In Wudang sword practice, power must be channeled from the Dantian to the sword blade, considering Dantian as the energetic center and as the axis of the mechanical power of the body, the transmission of force through the waist is much greater in deference to the force generated in the arms.

In general, Wudang sword avoids direct confrontation and circulates around the blows of other weapons, usually much heavier and stronger. It is wrapped by cuts and lunges in the body of the enemies, instead of seeking the direct blocking of the opponent's weapon. The cuts and lunges end up by forcing on the contrary to stop their fight due to the wounds. In this context it is a weapon much more technical and nobler than the saber, for example, which defines most of its attacks in cuts to slice directly to the opponent.

In the combat application the intention is to follow the flow of the opponent's strength, to feel their intention, to remain calm to wait for the movement of the opponent and to be the last to initiate the attack, but to attack first. At the time of attack, the spirit guides the practitioner to draw the sword boldly and directly, like an arrow when being fired towards a target.

Wudang's "Dān Jiàn" or "Elixir Sword," is a classic sword of the mountains, one of the ancient sacred swords of Taoist martial arts from Wudang, one of the most traditional forms of sword handling. At the time it was created, it was an amalgamation of various unified sword styles, this makes Dan Jian a very diverse form, containing 42 movements that combine fine and complex sword techniques from the Dan Pai sect together with strong and explosive attacks alternating with smooth and harmonious movements from Taiji Jian.

As a peculiarity of handling Dan Jian sword, body resembles being drunk but not the steps; steps look like drunk but not the mind; mind seems drunk but not the spirit. When practicing, you should gently move your whole body, waving from left to right, slow as clouds and fast as thunder, combining hardness along with softness. Techniques are based on the principle of change associated with the concepts of Taiji and Bagua, based on the belief that constant change is the rule of nature and should also be the guideline for the sword handling. Sword must be unified with the body to form a single being, so that it can be adjusted sword and mind so seem that it is nowhere but everywhere.

As Li Jing Lin said , famous Wudang sword master and successor of Dan Pai sect teachings, in one of his writings: "The key in the practice of the sword is for the body to move like a dragon swimming , never coming to an end ".

Li Jing Lin 李景林 (1885-1931), was one of the most famous swordsmen in modern Chinese history. For many years, General Li markedly improved his skill by inviting the best swordsmen throughout China to fight with him and share effective sword-fighting techniques. So much came to perfect his skills that came to be known as Li "Miraculous Sword".

Li Jing Lin was also general of the army and one of the founders of the famous Nanjing Wushu School, the Zhongyang Guoshuguan 中央國術館, known as Central Guoshu Institute. Li was also the chief general of a group of seven masters, famous for their skill in the sword and known as the "Seven Swordsmen of Wudang."

Song Wei Yi 宋唯一 (1855-1926), was famous for possessing the highest level of mastery using the sword at that time. Unsurpassed swordsman, he surprised the whole community of martial artists with his fencing skills, carving an absolutely deserved fame. He wrote famous books such as 'Wudang Danpai Jianshu' and 'Wudang Jiu Pai Yuanliu' (Origins of the Nine Sects of Wudang), and, along with his brother Song Depu, "Wudang Jian Pu" (Wudang Fencing Records).

According to the writings of Song Weiyi, the art of Wudang sword was developed by Tongxuan Zhenren, an honorary name of Zhang Sanfeng. The tradition remained within the Wudang mountains monastic warrior monks and was secretly transmitted until Wudang's famous inheritor Zhang Songxi 张松溪 (who lived during the reign of Jia Jing-1522-1566) renewed the (Wudang Jian) to the Siming Shan region, where the lineage of the "Dan" sect (Elixir, the Taoist alchemy goal).

Thus, art was transmitted over nine generations, the "Nine successors of the Dan Sect" (武当丹派):

This way the transmission of Wudang Dan Sec fencing was closed.

The word Dan (Elixir) appears in the names of the masters of the nine consecutive generations. 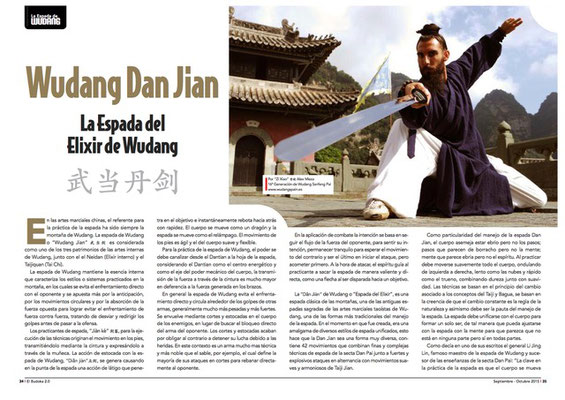 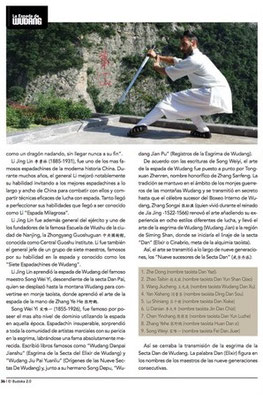