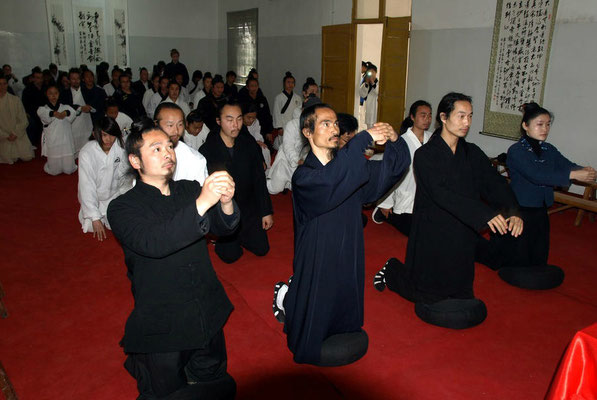 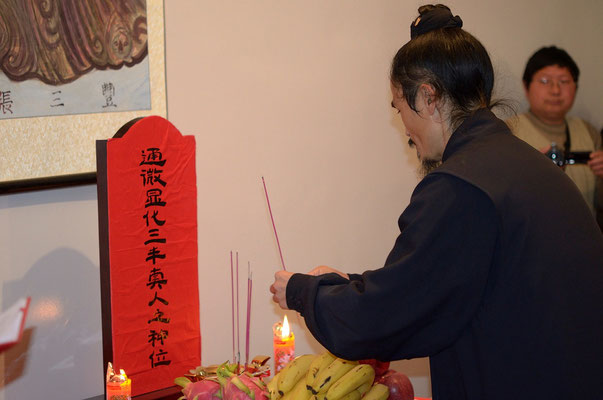 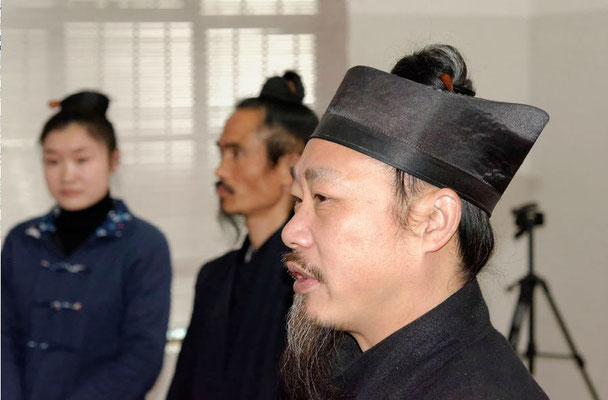 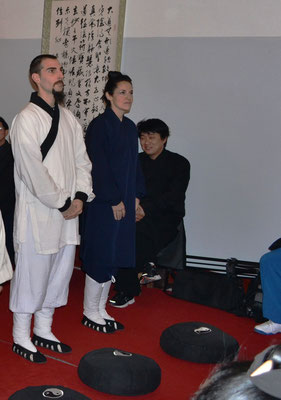 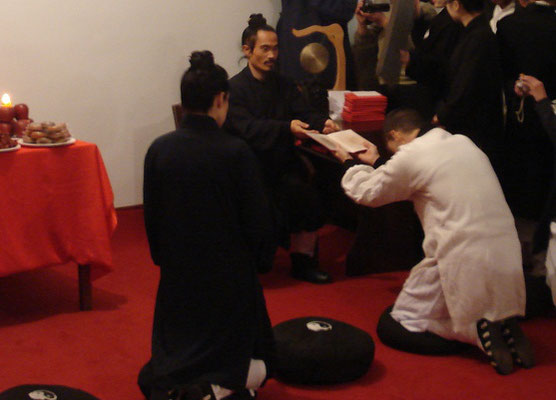 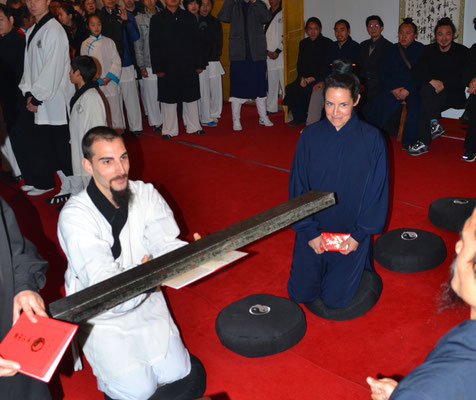 The rite or Li (禮) is a projection in the individual of the ritual spirit, where the sacred is transferred directly to the human and social. The term Li, which encompasses ritual, formality and etiquette, is the third of five cardinal virtues taught by Confucius. The other four cardinal virtues are benevolence, righteousness, wisdom, and faith. What distinguishes Li from the rest is its emphasis on human behavior, comparing it with cultivation of the most abstract or intrinsic virtues.

The disciples ceremony in Taoism, or Baì Shī, reflects this particular nature, establishing a relationship that emphasizes mutual respect and a commitment to follow the Way of Tao (道).

The ceremony makes sense if we understand it as a way of being present in body and spirit to make explicit the relationship of responsibility and obligation between the two members involved (master and disciple), in addition to ensuring the objectives of both, in which the student can achieve success in his way while the master can perpetuate his school.

The importance of Baì Shī ceremony lies in being a commitment in the transmission of knowledge and a commitment in the preservation of the social hierarchy. That is why there is a difference between those apprentices who directly access instruction (called disciples who have entered the family) and those who follow a less formal formation (called disciples of which only the name is registered). It is also the basis of the double responsibility between the two of them, for while the master must transmit the way, teach knowledge and resolve doubts, and the disciple has the duty to strive to achieve true knowledge and avoid dishonest attitudes that could tarnish the name the school, the master or their ancestors.

On March 9th, 2012, took place the first ceremony in Wudang Mountains to convey the Wudang Sanfeng Pai lineage (武当三丰派) naming the first promotion of the 16th generation official disciples. The ceremony was headed by Master Yuan Xiugang, 15th generation successor. It was attended by the rest of Wudang's brothers and masters, such as Chen Shixing and Chen Shiyu among others, as well as the grand master Zhong Yunlong, 14th generation, as the head of the family.

During the ceremony had read the precepts of Wudang lineage, the respect obligations towards the master and to his Shixiong (brothers), as well as the respect and fulfillment of the Taoist doctrine. Subsequently the new disciples were instructed in the three conversions and the five natural admonitions of Taoism. Once the readings were made the disciples performed their prayers and rites in front of Zhang Sanfeng's altar, they made their oaths and offerings to Master Yuan Xiugang and he appointed them his new Taoist name. During the ritual the gift exchange between disciple and master was performed: the disciple delivered the Red Envelope (Hóng Bāo 紅包) with ornaments of auspicious symbolism and prosperity, a tradition that has developed as a Chinese social custom since Han Dynasty and which is not limited to Chinese New Year only. The master later presented to the disciple with the Wudang Sanfeng family lineage book and a sword with its new Taoist name engraved on the sheet. Finally, master Yuan Xiugang and the grand master Zhong Yunlong gave speeches of thanks and good omens for the future of teachings transmissions of the Wudang Sanfeng Pai in charge of the new generation of official disciples.

Alex Mieza was recognized in this ceremony as the first disciple of the 16th generation of the lineage of Wudang Sanfeng Pai in Spain acquiring his new Taoist name Zī Xiǎo (资晓).

The ceremony concluded with the final family photo with the grand master, the 15th generation masters, the new disciples of the 16th generation and other students from the Wudang Sanfeng Pai.

After the ceremony a relationship between master and disciple was established, which in the Chinese social hierarchy is almost comparable to the relationship between father and son, hence the traditional term with which the master in Chinese is mentioned as Shī Fù ( 師父), Two characters describing the teacher's condition of the teacher and the paternal-filial relationship.

"This is a truly prosperous day. First of all, I would like to congratulate all of you for being 16th-generation official disciples of Wudang San Feng Pai. I would also like to thank all the guests of honor and all my Kung Fu brothers for taking the time of their busy schedules to attend to my humble disciples ceremony acceptance. It is my hope that in the future when my disciples will face the need for guidance, my Gong Fu brothers will patiently help and advise them. Disciples of the generation 16th, please pay homage to all your Gong Fu uncles.

Looking back at the development of wushu, in the last 30 years we can see many changes it has undergone along with society. During the 80s the Chinese Martial Arts in academies focused exclusively on the struggle without placing emphasis on culture. Whereas in the 90s Wushu academies became the schools where they went to study culture along with Wushu. During that time Shaolin Wushu had already reached its highest point, while Wudang remained unhurriedly latent to expand, remaining unknown to the outside world.

The world is constantly changing, after many years of inactivity, the arrival of the twenty-first century finally saw the awakening of Wudang. During the last ten years the economy of the whole world has expanded and although material standards of living have improved, spiritual culture must improve as well. On a superficial level the standard of living in China has progressed, however, in the wake of fluctuations in world economy, labor pressures on workers have increased and the environment has been suffering, causing deterioration of people's health and their life quality. Nowadays everyone tries to lead a 'healthy life' and gives great importance to physical exercise.

Consistent with current trends in health preservation, Wudang wushu continues to recommend and esteem the practice of cultivating health and character in order to promote physical and mental well-being. Alongside this, Taoist philosophy contains knowledge and guidance for everyday life management, our Wushu practice is also a method for practicing Taoism.

Taoism emphasizes the Tao as the natural Tao expressed in all manifestations, even in times when we are not aware Tao continues to strengthen and influence all things. As it is written in Tai Ping Jing, "Tao is from heaven, and is shared among people." The earth has virtue, and is shared between people. Between the two wisdom and energy are given to all to be cultivated ". Inevitably, many people have begun to devote a more serious study to the Taoist classics. Of course, as a result and natural progress, Wudang wushu health cultivation practices have permeated lifestyles and interests of many people around the world.

Both Taoism and martial arts circles have produced high-level masters through successive generations, with each new generation improving the teachings of the past in an effort that the pupil will surpass the master. As the saying goes: "The teacher can show you the door, but the student must walk through it."

I am hopeful that the successive generations of the Wudang San Feng Pai will closely follow the norms and expectations placed before them devoutly following Master instructions, concentrating on the purpose of meticulously studying the abstruse Taoism teachings. Working diligently to incorporate and understand the essence of Wudang wushu.

I firmly believe that in the near future with the great efforts of all in the Wudang San Feng Pai we will continue to prosper and develop. In the fulfillment of our patriarch Zhang San Feng we continue saying: 'Wudang will one day flourish.'

Taoism refers to all living beings as equals. Guided by the Tao, from sincerity in practice and from the pure heart comes the natural Tao. Tao follows the natural Tao. I sincerely hope that Wudang San Feng Pai disciples will solemnly observe and fulfill the three conversions and five admonitions, I expect disciples to maintain and cultivate virtue and succeed in their practice. May all your achievements be unlimited! "