Hair and Bun in Taoism

In most ancient civilizations, long hair was always been a symbol of strength, dignity, honor and freedom. If we look at the historical background of different ancestral cultures that lived throughout the planet, we will see that in most of them both men and women maintained their long hair. In different parts of the world long hair was considered a symbol of honor and power, many ancient warriors let their hair grow long, even considering as embarrassing to lose it. In some cultures short hair could represent slavery and submission, being long hair a symbolic element of most powerful characters as kings, wise men or great warriors.

Well known is the example of Native Americans, who considered hair as a symbol of power and freedom, as many of these tribes used to cut the hair of defeated people when winning a battle.

Biblical references to mystical significance of hair can be found, as in the well-known story of Samson the Nazarene, his supernatural strength was attributed to the length of his hair. Story tells that Samson could only be defeated once his hair was cut.

Also in Hinduism it is understood that long hair helps increase the development of primordial energy, and maintain it long helps to maintain tranquility, enhance vitality and develop intuition.

In Taoist culture, hair is considered as an extension of nervous system, understanding that hairs are a kind of sensory wires that function as antennas, perceiving energy of the environment and transmitting information to the brain. These antennas act as conduits to capture a greater amount of cosmic energy. According to the region of the body hair has a different perception capability, considering that head hair is the one that receives sun energy (Yang) and chin hair receives moon energy (Yin). It is also noticed that long hair helps to produce a greater amount of physical energy, improves endurance and even endows the brain with a more efficient memory, helping also to cultivate aspects of character such as patience, essential to facilitate evolution in mental processes that lead to meditation and visualization. Long hair also prevents harmful waves of the environment from affecting the mind to a greater extent, which can be kept away from suffering from uncontrolled emotional activity.

Taoist world view understands that hair has electromagnetic energy, is sensitive to environment subtler perceptions, captures energy around us and stimulates the transmission of that information outside the very center of our brain, where the pineal gland is. Cutting hair also alters the process of light transmission through the skull pores to the pineal gland, and this directly affects the brain activity.

Pineal gland strengthens the immune system, increases creativity and is also responsible for releasing different hormones, such as melatonin that helps us slow the aging process by contributing to the biological clockwork of the human body, as well as being a powerful antioxidant that provides some protection against the harmful effects of oxygen toxicities and radiation. This gland is appreciated as the place where all our thoughts form, the main seat of our soul. Activation of pineal gland is essential for the development of higher intellectual functions, as perceptions of spiritual character also increase the emission of electromagnetic energy emitted by the brain to outside environment. With today's mesures, it is already proven that the longer the hair, the broader the electromagnetic energy that radiates human body.

Modern science has also discovered that long hair increases lymphatic fluid and spinalbrain fluid production through the two ducts of the upper brain. In addition, brain needs vitamin D to also absorb phosphorus, calcium and metals, vitamin D protects the human body from serious diseases and is an essential element for bones, teeth and nervous system. Several researches have shown that longer hair is the greater key to production of this vitamin D, which is created through the interaction of the sun with natural hair oil. Besides, cut hair consumes much more protein in human body, because it has to be spent in the process of growing more hair, while hair when it is long enough greatly slows down its growth process, so it stops consuming much protein . Our body has to provide a lot of energy and essential nutrients to grow the hair continuously cutted.

Most of the ancient Indian medical sciences reveal that one of the causes of chronic cold is the haircut and in many last century chronicles it is mentioned that people with long hair are less likely to suffer certain diseases. In addition, hair has the ability to regulate body temperature with climatic variations, as hair is a good conductor of heat and cold for the head and body.

For some reason we have the longest head hair of all mammals, and unlike other elements that have been lost with evolution, head hair has remained and even increased. This shows that human body continually tries to grow hair in the upper area, because with it our nature gives us the ability to collect several minerals.

All these data show us that long hair is certainly important for our physical and mental well-being.

Of course, these scientific data have not been so well-known throughout ancestral traditions, but they are, as so many other times, a further verification of how science always ends up recognizing in one way or another that many of the ancient traditions have a foundation of absolute biological coherence that goes far beyond of being a simple folkloric tradition. But this is how mentality works in the contemporary Western world, until 'official' science does not name and surname nature of events, it is not to be recognized that they actually occur. Even so we have been able to prove throughout our most recent history how many saints, scientists, philosophers and great thinkers of different cultures and parts of the world conserved a long hair during their life, and even the beards. Without having to possess scientific data to have a reason for it, this habit surely arrived to them by a natural way due to that biological coherence.

In Taoist culture, derived from shamanic traditions of ancient China, long hair has always been a common habit for its adepts, who have known from ancient times the signs that hair expresses to us, from the most subtle to the more easily perceived, as when we are in alert conditions and our hair is automatically bristling, trying to capture and recognize the maximum energy of the atmosphere, a mechanism that allows us to face danger situations with more attention and courage.

We can also see how in Taoist culture and especially among practitioners of internal culture systems, hair is usually collected on the top of the head in the form of coil or `Fa Ji '(发髻), as well as In Hinduism with its 'Rishi' knot. Taoist topknot is collected concretely on the highest skull point, known as `Bai Hui '(百會). This is, besides an important point to calm the spirit, a meeting point of body's Yang channels, an energetic door to open communication with celestial energies and a point to activate the small "celestial circulation" described by Renmai and Dumai channels.

Following the principle of understanding that hair act as antennas to better capture the energy of the environment, or cosmic energy, Taoist practitioner picks up his hair by forming a spiral just above Bai Hui point, thus creating a hair coil that further amplifies that ability to capture and collect subtle celestial energies. Taoist topknot can be collected in different formats such as Taiji Ji (太极髻) or Hun Yuan Ji (混元髻) models, depending on how they are wrapped. In that the hair bobbin is nailed in between a hairpin or `Zanzi '(簪子) of wood or jade, usually carved with some kind of symbolism, such as a dragon, for the dragon is the spiritual symbol that represents the essence that Emerges from conscious knowledge. 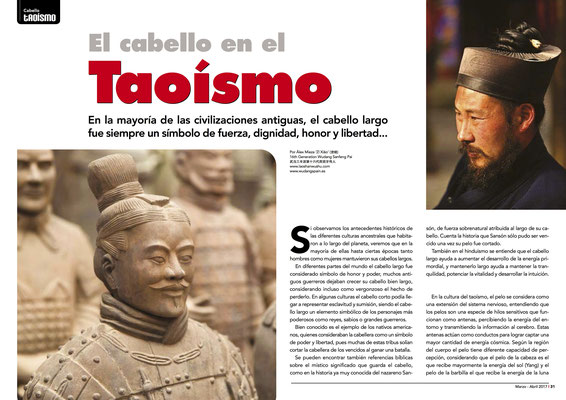 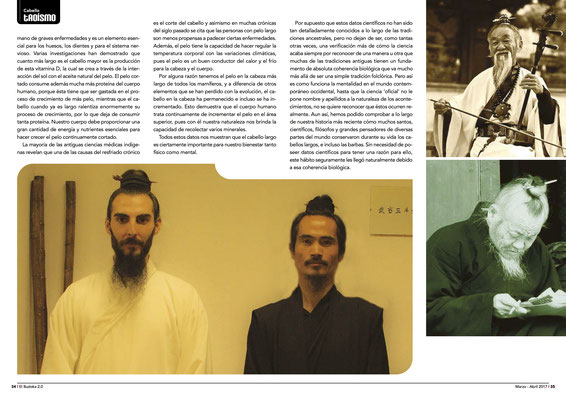 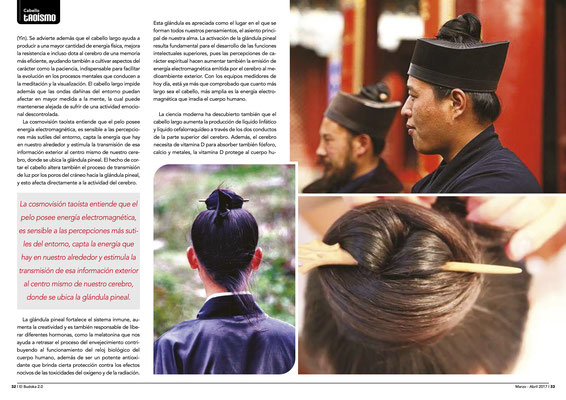 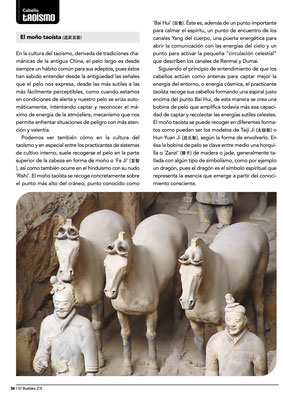