Before arrival of firearms to China, sword (Jian) was one of the most powerful light weapons. From Spring and Autumn period (722-481 BC) to Western Han Dynasty (206 BC-8 AD), Jian sword was the most important weapon used in wars. During Han and Qin dynasties (221 to 206 BC) sword reached an unprecedented level of development; The emperor, military and high-ranking officers, and even civilian officials regularly used swords. Later, during Tang Dynasty (618-907 AD), scholars made references to "three great arts," in which they referred to painting, poetry, and sword. Over time martial artists and calligraphers also came to conclusion that calligraphy and martial fencing had similar origins. In eyes of an accomplished calligrapher, fencing is a source of inspiration, for it resembles a kind of calligraphic dance, while for a martial arts master, calligraphy equals  sword dexterity reflected on paper.

Also during Sui and Tang dynasties (AD 581-907), men liked to carry their sword with them when they went out into streets, also to cavalry style was fashionable, even they were commonly carried by scholars for their elegance, in addition skilled people in fencing could gain others respect. In those times friendly competitions, duels and spectacles of skill demonstrations with sword were very frequent.

In history, warriors and heroes were always honorable men. In training, virtuous conduct was vital important, for sword-holder was to express cavalry, an indomitable will, great courage, and not to use hte art against his countrymen, as well as evade unnecessary fights to show courage, controlling always emotions like rage and lust, which should always be avoided to all costs.

Until less than a century ago sword has always been a very popular object in Chinese culture, a home decoration element used as a protective amulet. In Taoist rituals and ceremonies, swords have often been used as symbolic weapons to subdue evil forces and spirits to call upon and summon the heavenly masters to destroy hell, save the dead, and dispel bad spirits and ghosts.

In ancient times, wandering Taoist monks traveled with their swords as a symbol of severing their ties to material world, each Taoist had his own sword to be used in practice either for self-defense or for ritual purposes. As is well known, practice of martial arts forms personality in order to learn to let go anger, impatience, desire, selfishness and hatred. It also happens with sword's Taoist vision, that is not seen as a tool exclusively for fighting enemies and kill, but as a symbol of justice and righteousness, representing discipline used for conquest ignorance, passion reckless and aggression.

Handling the sword, as in martial arts, teaches us much more than defending ourselves against a possible attack, confronts our weaknesses and pushes our physical and emotional boundaries. The aim of sword practice in Taoism is to manage it by keeping calm heart and peaceful, by controlling emotions. It is said in Taoism that sword that is used clearly is also a symbol of a clear mind, to handling the sword must always be accompanied by the spirit (Shen).

During sword practice, empty hand always makes one of the Shou Yin (mudras) most employed in Taoism, joining the index and middle fingers. This practice with fingers is often used in internal practices as amulet of protection, also with time has adapted to regular sword use in general, also serving as compensation to balance the sword from other arm. Another Taoist influence point in handling the sword can be found in its techniques, which unlike other weapons never surpass above the head, for there lies the point of opening to sky, better known as Baihui (hundred meetings ), located in the fontanel, because to surpass it would mean to cut or to interfere in communication of channel connection with celestial energy.

Association of sword with magical powers and as justice image is not exclusive to Taoism, we can also find similarities in other religions such as Sikh religion in India, where they also contain sacred swords such as Khanda, the straight sword that symbolizes knowledge of God, or also Kirpán, that in its origins was a ceremonial big sword but at the moment is more like a small dagger. They symbolize power and freedom of spirit, respect for oneself, constant struggle of good and morality over injustice. Closely related to the Taoist idea, for the Sikh people "to destroy pride, emotional attachment and sense of ownership, is the path of double-edged sword."

In Taoist current we also find that in disciple's ceremony, generally Masters give a sword to new disciples with the Taoist new name engraved in its leaf.

Historical characters of Taoism commonly related to the sword:

Known as "Yellow emperor" and author of Taoist medicine canon "Huangdi Neijing", was a passionate swords collector, as he is known to pose a sword arsenal of various materials such as jade, copper and gold.

One of famous 8 immortals, best known for his sword fight. Was subjected to ten temptations that surpassed, after which was granted a sword that possessed supernatural energies with which expelled dragons and other "monsters", related to great world evils.

Another one of famous 8 immortals, had a vision in which Lao Zi arrived to tell him how to reach the Heavenly Master. It is also said that he expelled ghosts, demons and evil spirits through a parchment of talismans and a magical powers sword.

Famous prince who left imperial palace to retreat to Wudang mountains, always depicted with a sword, is the weapon held in his struggle for dragons domestication (ego, desire, habits, inconstancy and rites), on his way to inmortality. Another legend says that borrowed Lü Dongbin's sword to subdue a demon from mighty, and after succeeding he negotiated a check on the power he possessed. Sword itself magically will return to its owner if Xuan Wu set it free, so it is said that he always hold strong the sword, and is unable to release it.

Wudang Mountains Taoist monk, renowned for his exceptional handling of sword and as being the creator of Taiji system. Wroted the "Five steps to golden tone" were it said: Practice sword under moonlight (to develop power), Practice Taijiquan in the dark (to develop vigor), Climb mountains on windy nights (to enlarge Breathing), Read classics on rainy nights (to clear mind) and Meditate on midnight (to illuminate nature). 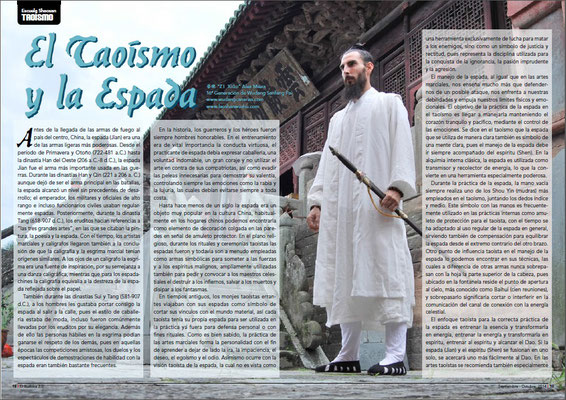 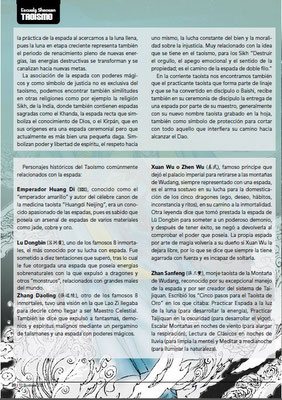