Wudang Mountains (武当山) is located in Hubei Province northwest, China. These mountains stand out for being the core of many Taoist temples and for their historical tradition of relevant Taoist, alchemy and traditional medicine masters. Wudang is also known as one of the five sacred Taoist mountains in China, which historically have been an epicenter of Internal Martial Arts for hundreds of years.

Although the origin of Internal Martial Arts is already a fact more than contrasted and accepted throughout China and the rest of the world, deserve track the data that in late 90s, a researchers group from the Wuhan University leaded by Dean Jiang Bailong, reached the irrefutable conclusion that different methods of martial arts influenced by Taoist theories led by the famous Taoist monk Zhang Sanfeng (張三丰) were set in Wudang mountains. This Zhang Sanfeng it is said that lived in late thirteenth century.

Zhang Sanfeng acquired a remarkable martial ability, while developing methods of internal cultivation to evolve physically and spiritually, basing his method on the original 13 postures that represent the core of Taoist Taiji concept. From these principles emerged various Internal Martial Arts practiced in the mountain, which are known as Wudang Neijiaquan (武当内家拳), from which various styles were borned like the famous Taijiquan (太极拳).

One of Zhang Sanfeng disciples, monk Wang Zongyue (王宗嶽), someone who was first attributed to the use of Taijiquan word to define the internal style created by his mentor. It is also through Wang Zongyue and turn of Jiang Fa (將發), by which the style reaches the villages of Chenjiagou (陳家溝) and Zhaobao Zhen (趙堡鎮), thus creating the famous Taijiquan styles: Chen and Zhaobao. Although in these villages the use of the word 'Taijiquan' to define their styles are laid down several decades later, with the inevitable rise of the term Taijiquan to define the style based on the principles of Taij Taoist concept. That same term boom ended by also labeling one of the main methods of Wudang Mountain martial practice, known as the softer method, which also ended by naming it as Taijiquan.

Beginning in 1966 with the arrival of Cultural Revolution (文革) organized by leader Mao Zedong (毛泽东), the classical arts, including Martial Arts, were repressed throughout China, persecuted its practitioners and many masters had to resort in exile, and like various prevailing religions such as Buddhism and Taoism were also pursued.

Some of these masters had to leave China and go into exile abroad, leaving to places like Hong Kong, Taiwan or even some nearby countries like Indonesia or Vietnam ... others retired to live as hermits and others mingled with ordinary people incorporating rural communities or living in the cities looking for life with normal jobs like the rest of the population. Many of them abandoned their practices altogether and some others tried to keep them in secret under the possibility of being discovered, at the risk of being arrested and possibly executed.

This caused that for many years the Martial Arts disappeared almost completely in main China, due to the brutal repression. Nevertheless, some systems still remained on Wudang Mountains, and others continued to be practiced in various places, there where masters and practitioners exiled inside the same China or outside the country, secretly teaching from master to disciple.

Abbot Xu Benshan (徐 本 善) (1860-1932) of Longmen Pai (门派 门派), in charge of Wudang main monastery, Zixiao Gong (紫霄宫), was one of the main reasons that part of the Temples in Wudang Mountains were saved from destruction during the war. This is cause after one of the battles between communists and nationalists, in 1931, Abbot Xu decided to take refuge in the monastery to wounded communist soldiers, allies of General He Long (贺龙), known as one of the ten best Military leader officers, so that they could heal and recover, even going so far as to teach to the general and the soldiers one of the oldest styles, the Taiyi Wuxing (太乙 五行 拳).

Since the end of Cultural Revolution, in 1976, China began to open up to the world. Government reforms were introduced to introduce capitalism in hands of politicians such as Deng Xiaoping (邓小平) and many other changes were initiated that continue to this day, such as the initiation of an Opening and Reform Program (改革 开放), which included a loosening of the blockade on religious liberty provoked by the revolution. After this there was a slow dripping of Taoist masters who returned to Wudang. Thanks to this they returned in the 80's and 81's masters as Guo Gaoyi (郭 高 一) (1921-1996) and Zhu Chengde (朱诚德) (1898-1990) from Longmen Pai lineage.

At that time, in spite of that certain "new cultural opening" that was gradually being implemented, the standard of living on Wudang Mountain was very hard. The old masters were very strict and only taught secretly at night, so that no one would see him during the day. There were no Martial Arts schools in the mountains. The only people who could learn the Wudang arts were formal priests, since there were very demanding rules about who could teach and what could be learned.

Beginning in 1988, Mr. Qiao Shi, a congressional diplomat, visited Wudang and inspired the priests to open the doors and start spreading Wudang Martial Arts to the outside world. One of those changes that initiated the new Chinese policy was the recovery of Martial Arts as a cultural sign of China. Likewise, there was also an important movement for the recovery of traditional styles that had been lost, or rather persecuted, during the cultural revolution. In all this process of recovery of traditional arts from the mountain is also framed the resurgence of Wudang Internal Arts. Some temples that had been burned were restored, Taoist communities that had been displaced were rehabilitated and masters who had to leave the persecution began to come back.

In Wudang there are now different lineages. These lineages, sects, schools or styles, denominated in Chinese "Pai" or "Men", have different sizes, meanings and reasons for why they were created. Approximately 70% of Taoist monks on Mount Wudang are derived from Longmen Pai lineage of Taoist order Quanzhen (全真派), the most widespread in all China. The Longmen Pai lineage was founded by Qiu Chuji (丘处机), also known by its Taoist name Changchun Zi (長春子).

In Wudang Mountains the Longmen lineage has been active since its 9th Generation with Zhang Tai He and Yu Tai Yuan in the seventeenth century, passing through famous Xu Benshan of the 15th Generation, who was abbot of the Zixiao Gong temple.

The last direct disciple of Zhang Sanfeng was Zhang Songxi (張松溪), the disciples of Zhang Songxi founded the Songxi Pai lineage, which to this day is another important lineage in the mountains. Other lineages like the Chunyang Pai are also branches of the same tree. There are many more like Ziranmen, Qingzu, Tiangang, Santianmen... the list is very long. At the time of Cultural Revolution many traditions were lost over time and even some of the smaller lineages disappeared or were interrupted for a long period of time.

The lineage of Sanfeng Pai, one of the most widespread now in Wudang, is a good example to mention those lineages that were interrupted earlier.

Wang Guangde (王光德) (1947-2001), who had studied with masters Li Cheng Yu (李诚 玉) (1885-2003) and Xiao Yao Wan (萧 耀 宛) (1911-1997), and who presided over the Wudang Taoist Association was the reason of the resurrection of Sanfeng Pai lineage naming Zhong Yunlong (鍾雲龍) as a representative of 14th generation, who had been teaching for many years in Wudang under the tutelage of masters Guo Gaoyi (郭高一), Zhu Chende (朱诚德) and Wang Guangde himself, belonging to Xu Benshan's lineage of Pai Longmen.

In 1985, Zhong Yunlong was sent with introduction letters to an intensive search that would take several years to tour different places of Taoism, calling for the recovery of Wudang's legacy, bringing back the original styles and methods that came out from the mountain. Thus Zhong Yunlong recovered much of the arts that had disappeared during the cultural revolution.

It is also worth mentioning that two famous masters returned to Wudang in 1986, these were the Taoist Bagua master Lu Zijian (吕紫剑), and the Taoist nun carrying the Taiyi Wuxing lineage, Zhao Jianying (赵剑英). Zhu Chengde, Guo Gaoyi, Lu Zijian, and Zhao Jianying along with Zhong Yunlong were at the center of a revival of Martial Arts activity on Wudang Mountain of such magnitude that had not been seen since the fall of the Qing Dynasty.

In 1989 the Wudang Martial Arts Taoist Association was founded in the palace of Zixiao Gong, with Guo Gaoyi and Zhong Yunlong at the head, a non-governmental organization that since then acts as the highest regulating body of Martial Arts practiced in the mountain.

Master Wang Guangde compiled in 1993 the entire evolutionary history of Wudang tradition in his book 'Wudang Daojiao Shi Lue' (武当 道教 史略) published by the Chinese press publishers Huawen Chuban She (华文 出版社), and is up to now the main academic text on the subject.

The central body of the Martial Arts, traditional Taoist health culture techniques, and alchemical knowledge grouped by Master Zhong Yunlong were organized under the umbrella of Wudang Sanfeng Pai lineage, which emerged in the late 1980s with a plan of much broader and more structured study of what was manifested before the cultural revolution.

Not to be confused with the names of the lineages, the name of the lineage Sanfeng Pai does not mean that only in this lineage is represented the direct line of Zhang Sanfeng, since the same Zhang Sanfeng was a Taoist monk belonging to Longmen Pai lineage known such as Huolong Zhen Ren (火龙真人).

Also "Wudang Pai" is a term that is generally used for the whole of Wudang arts and culture, it does not refer only to Martial Arts. Although it is also used to refer to many of the old forms that can still be found in China, which do not date back to any particular line but are supposed to have been originally given in Wudang Mountains.

As is happening in these times with Shaolin systems, which several of its representatives have been collecting original methods and forms that left the temple during the Cultural Revolution, the present systems that we can find in the different lines that exist today in Wudang are partly systems that survived on the mountain that were transmitted for centuries and partly collections of what was originally worked there before the revolution hat was relocated in different zones of the Chinese geography, mainly temples and Taoist mountains where masters of that time took refuge.

The lack of information and the prolonged delay with which Wudang arts have been expanded into the outside world compared to the rest of Chinese Martial Arts has generated much confusion, even coming to think that currently the styles or methods that can be found on the mountain today were invented a couple of decades ago, but obviously that does not correspond with reality. 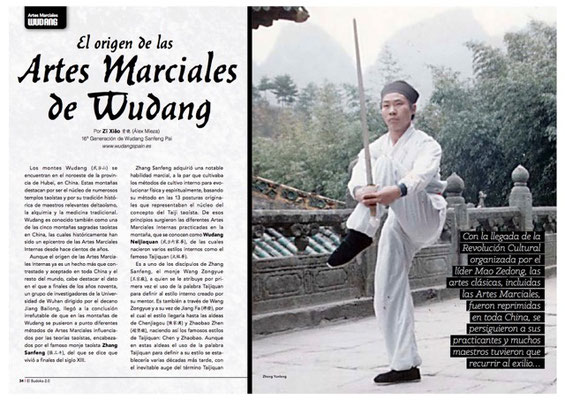 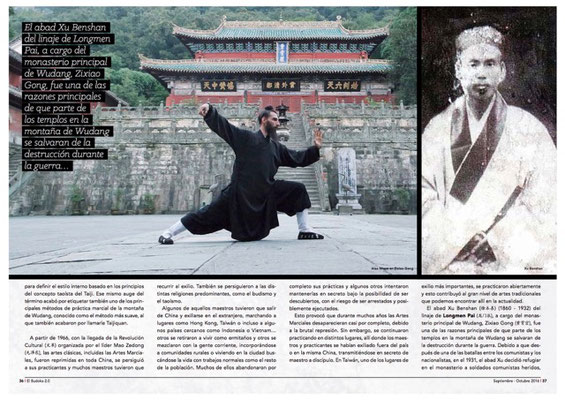 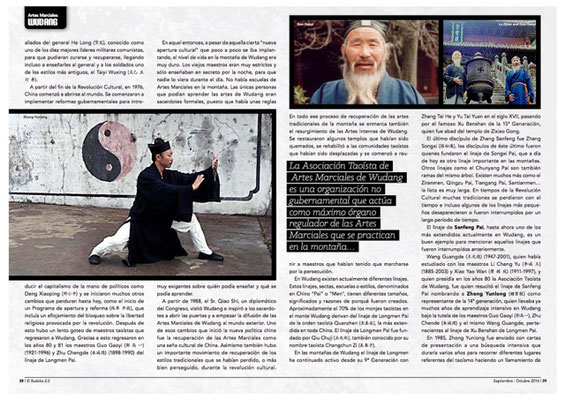