Famous Wudang Mountain, located in central China, is the core of Taoist culture and Neijiaquan (内家拳). Wudang mountains history is full of legends and stories about the character of Xuan Wu, mountains pattern, and many of its temples, altars and rituals are dedicated to this deity.

In ancient China, astrologers divided the 28 celestial constellations into 4 main mansions: To South the Red Bird; To East the Green Dragon, to West the White Tiger, and to North the Dark Tortoise (Xuan Wu). This North Mansion was shaped like a tortoise and a snake, in ancient China it was thought that tortoise and snake were spiritual creatures that symbolized longevity. The black tortoise (龜 龜) is also known as the 'Dark Warrior' and also represents winter season.

The representation of Xuan Wu's character has to do with its symbolism: A warrior, a dark turtle, a snake, a reptile.

We humans have a Triune Brain. In the front of the head we have the most current section in terms of evolution as a species, which is used for thought, called Neocortex. Behind this, in the center, we have a somewhat older part of the brain that can experience emotions, known as the Limbic System.

However in the innermost part of the head, there is a very old part of the brain that is purely activated reflex, the so-called Reptilian Complex. Its origins are from the beginnings of our evolution as a species, from when we were still reptiles. The reptilian brain would correspond to the ancestral brain, which governs the regulation of vital functions and primitive behavior: fear, hatred, instinct for survival, territoriality or the desire for power. These instincts are manifested in a variety of ways and forms in human behavior, basically any compulsive reaction of either attraction or aggression based on any physical manifestation, originate in the reptilian brain.

It is this reptilian mind that as martial artists we use in reflex reactions without reflections or thoughts, is what activates in the conflicts of survival. In the struggle there is usually no time for thought or emotion, only action, the brain needs to have reactions of instantaneous reflexes either to avoid being hurt or to counterattack.

The reptilian brain is a powerful resource of human behavior, especially because it is hidden, it is deceptive, it is a secret of our conscience. It is the serpent slithering in the darkness. It is the unconscious.

Xuan Wu is one of the highest-ranking Taoist deities. He is venerated as a very powerful god, able to control a great magical power. Particularly revered by martial artists and ancient warrior travelers, in fact Xuan Wu is a god of martial arts. But Xuan Wu does not only represents that association of power control over the reptilian brain in its use for martial, but in its relation of control within the Taoist internal practices, since Xuan Wu has a more important symbolism in relation to internal cultivation processes.

For Taoist practices, one of the important steps to take before you can prepare body to transform the spirit is to make sure that the energy being used for the construction of immortal body has positive qualities. There are Taoist meditation techniques, where five negative emotional traits: anger, hatred, anxiety, sadness and fear are transformed into five positive elemental traits: goodness, love, trust, courage and trust . These transformations are carried out inside the internal organs themselves, the viscera.

The story of Xuan Wu character tells that he was a warrior who became immortal passing symbolically through this organic and emotional process, as it is said that he removed his internal organs and poured them into a river to purify them. By washing their internal organs, their sins dissolved into water forming a snake and a tortoise.

The hypostasis of Xuan Wu (his personification as immortal human) is usually represented sitting and barefoot, with the hair soil, symbol of his internal cultivation practice. Sometimes it is also represented with a third eye on the forehead. It usually carries a dragon in relief on the  armor belly, because dragon is the symbol of immortal spirit body strengthened in Dantian. His main characteristic as a character is that he is always represented also by the domination of the snake and turtle under his feet, symbolizing control over his viscera, his emotions, his instincts, his spirit (Shen).

Thus, since ancient times, Wudang Mountain has been a Taoist spiritual center with a multitude of temples that dedicate their worship to Xuan Wu as a deity reference of martial and inner cultivation, the legend that ther was a moment in history that a warrior named Zhang Sanfeng also remained in those mountains under the auspices of Xuan Wu deity while working to further develop his inner martial arts style, makes more sense.

The main temple of Wudang Mountain, Zixiao Gong palace (紫霄宮), and especially its Purple Cloud Hall, is the sacred place to perform Taoist rites to Heaven in honor of Xuan Wu the first and fifteenth day of each lunar month. The 3rd day of the 3rd month in lunar calendar is Xuan Wu birthday, and on that day offerings and celebration rituals take place in all temples on the mountain. 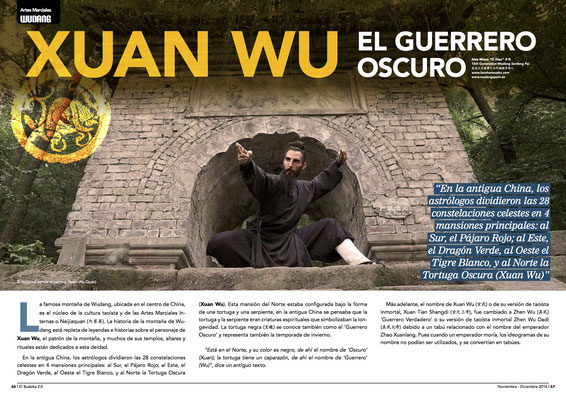 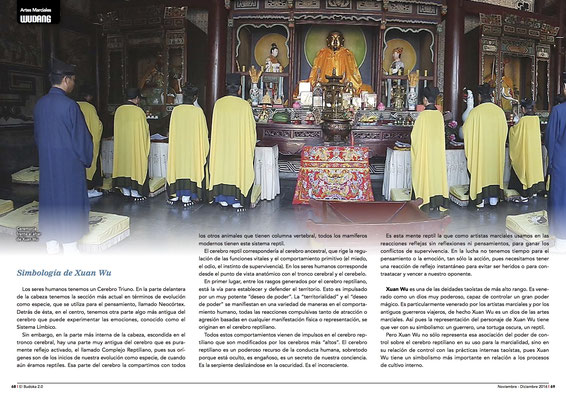 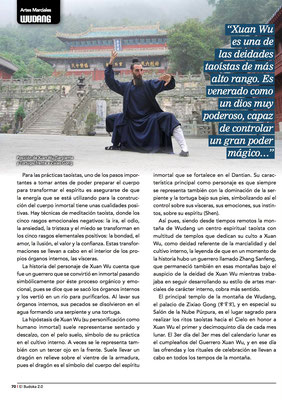